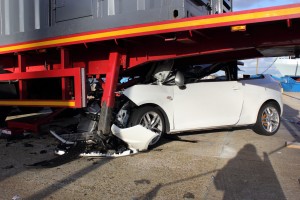 The issue of drowsy truck drivers has been thrust into the spotlight following comedian and actor Tracy Jordan’s recent accident. The star’s limo was traveling on the New Jersey Turnpike south of New York City when a drowsy truck driver slammed into the back of the vehicle, causing Jordan serious injury and killing one of his close friends, comedian James McNair. Aided by technology on the truck, authorities determined that the vehicle was speeding in excess of 20 miles per hour when he failed to notice the stopped traffic ahead of him in a timely manner. He attempted to swerve out of the path of the vehicles, but failed to successfully do so, causing him to smash into Jordan’s car. Prosecutors allege that the trucker had not slept in over 24 hours.

Truckers and companies who fail to abide by these federal rules and allow drivers to exceed the driving limit can be fined $11,000 per offense. Drivers can face additional civil penalties for each offense up to $2,750. Policymakers believe the law has saved or will save at least 19 lives and cause 1,400 fewer crashes and 560 fewer injuries over time.

According to the Federal Motor Carrier Safety Administration, 2010 saw 3,484 large truck-related fatalities, up nine percent from 2009. This accounts for one in seven accidents, making drowsy driving a leading cause of car crashes and highway fatalities. The National Institute of Health states that 110,000 injuries and 5000 deaths occur annually in truck accidents. Of these, anywhere between 1 and 56 percent can be partially or completely connected to driver fatigue. The numbers vary so greatly due to the difficulty of definitively concluding that fatigue was a causal factor. It is very difficult to prove, and truckers often face steep fines and potential civil and criminal consequences and liabilities if they admit to driving while drowsy, so these instances are significantly underreported.

Those who have been injured in a drowsy trucker accident in Chicago can contact a personal injury attorney to discuss their claim, receive the compensation they need in order to heal, and move on with their lives.