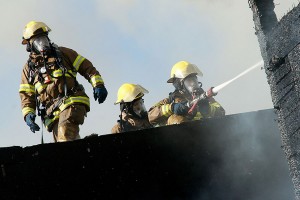 The National Fire Protection Association (NFPA) reports that 64 firefighters lost their lives in the line of duty throughout 2014. 37 of these deaths were from overexertion, heat stress, or underlying medical conditions that were exacerbated during rescue situations. The causes of these fatalities included tasks such as evacuating fire victims to safety, climbing ladders, and attempting to position heavy hoses. Highlighting the dangers, a 2008 study conducted by the Illinois Fire Service Institute and the University of Illinois at Urbana-Champaign showed that it takes only 18 minutes of firefighting activity to increase heart rate and body temperature to dangerous levels.

The NFPA report showed that crashes claimed 9 lives last year making it the second leading cause of firefighter fatalities. These crashes were the result of fire trucks attempting to navigate traffic conditions, adverse weather, or difficult to access terrain. Each of these factors increases the chances a fire truck will be involved in an accident. Nationally, an average of 30,000 accidents involving firefighting vehicles occur each year. Thus, while vehicular accidents were the second leading cause of fatalities for firefighters in 2014, overall it’s a very low fatality rate. It’s a rate that clearly shows the safety protection the vehicles combined with the use of seat belts provide.

As can be expected, fire and explosions are the most common hazards firefighters face and in 2014 they claimed 5 lives. Firefighters are trained to expect the presence of potentially explosive materials at every fire. That includes gas cannisters attached to BBQ grills, cans of hair spray in the bathroom, ammunition stored in gun cases, and camping fuel stored in the garage. While firefighters are alert for these, there presence can remain undetected hidden beneath burning debris and cloaked by smoke.

Falls from ladders and roofs accounted for 3 fatalities, while structural collapse accounted for 2 fatalities. These often occur when ladders are attached to building facades that have become unstable due to fire damage. While firefighters practice extreme caution when approaching a fire, conditions can change rapidly making the risk of falls or building collapse an ever present possibility.

In addition to fatalities, the NFPA report indicated that in 2014 there were 63,350 injuries reported by firefighters. 43% of these occurred during emergency firefighting operations, 23% in non-emergency situations, and 11% during training accidents. These injuries included muscle strains, sprains, wounds, and bruises. With an estimated 1.13 million firefighters in the US, this means that 1 in 20 firefighters experienced an on-the-job injury in 2014.

It is important to note that the long-term health consequences of firefighting can manifest years, even decades after a firefighter has left the profession. Smoke inhalation, exposure to asbestos, and contact with hazardous chemicals can cause respiratory problems, cancer, and neurological damage. According to the Environmental Protection Agency, there are 70,000 toxic substances, and nearly 70,000,000 possible combinations of these that firefighters can be exposed to during a fire.

According to the International Association of Firefighters, back injuries are the most common type of injury firefighters experience and account for roughly 50% of all injury retirements. Most of these injuries are caused from evacuating injured individuals, or from lifting heavy equipment such as air tanks, ladders, and fire hoses. These activities put considerable strain on muscles, tendons, and joints which can lead to arthritis and loss of mobility later in life.

Because the risks of injury are significant, the State of Illinois amended the Illinois Workers’ Compensation Act in 2008 to provide greater protection for firefighters. The amendment to the law allows firefighters and their Chicago workers’ compensation lawyer to file claims should they develop medical conditions that are the result of exposure to blood-borne pathogens or carcinogenic chemicals. The law presumes that a firefighter filing claims for these, or other physical impairments, can claim the injury resulted from their firefighting duties. The exception to this is if a firefighter has been employed for less than five years, in which case they have a greater burden of proof when linking their injuries to on-the-job exposure or event.